All about carpal & tarsal injuries

Injuries to the carpus and tarsus of the greyhound are common. The carpus is the wrist joint of the dog and the tarsus is the heel joint. These joints act as shock absorbers during weight bearing and are easily injured due to their lack of muscular support.

Both the carpus and the tarsus are very complex, multilevel joints, supported by several ligaments and a joint capsule. This makes them challenging to treat for both vets and physiotherapists. Injuries to these joints can result from either acute trauma or activities that cause a sudden repetitive sprain to the ligaments surrounding them.

Greyhounds start their racing careers from around 15 months of age and can race up until 4 or 5 years old. The racing Greyhound is an elite athlete and has been selectively bred for speed. In the majority of cases, acute trauma is not the cause of the injury, rather adaptive remodelling of the musculoskeletal system and failure to withstand the forces developed during the race (Guilliard, 2012). Injuries are most commonly seen in the right fore and right hind limbs of the racing greyhound as a result of repetitive forces generated from running anti-clockwise around the track. Excessive stress is applied to the medial (inside) aspect of the limb. The tighter the curve, the greater the lean the greyhound puts into the bend to overcome centrifugal force and maintain speed. The degree of lean puts stress on supporting structures in the limb and over time, stress fractures and other injuries can occur (Guilliard, 2012).

Injuries to these joints can result from either acute trauma or activities that cause a sudden repetitive sprain to the ligaments surrounding them. Some conditions remain asymptomatic for a long time before the extent of the problem becomes visible. Other conditions, like accessory carpal bone (ACB) stress fractures for example, may show up as intermittent lameness. Stress fractures often follow a pattern of mild lameness following a period of rest which resolves within a few days. This intermittent lameness can go on for years. Fractures of the carpal and tarsal region are commonly seen, along with ligament sprains and luxations. Depending on the grade of fracture, treatment will vary but often results in a surgical fixation of the affected bone. Some dogs can make a full recovery and continue racing but others are retired. Along with stress fractures, avulsion fractures are also commonly seen. Avulsion fractures occur where the collateral ligaments attach on either side of the tarsus. A physiotherapy opinion is strongly recommended with these dogs following veterinary treatment to reduce the long-term effects of the injury.

Sprains are frequently seen in racing dogs. Sprains are ligamentous injuries and are graded by severity. Grade 1 sprains are mild and described as an overstretching of the ligament, without tear or loss of function (Jaeger, 2008). Grade 2 sprains are moderate in severity and described as a partial tear. Grade 3 sprains are severe and involve complete disruption or tearing to the ligament, resulting in considerable joint instability (Jaeger, 2008). Unlike tendons, ligaments have a very poor blood supply and therefore can take a long time to repair. In order to repair, the torn ligament requires a collagen “plug” or scar to form and fill in the gap. The scar tissue is very weak to begin with and if overloaded too soon, will re-tear. At the end of the first year, only 60% of the ligament’s strength will have been regained under a strict rehabilitation programme (Jaeger, 2008). Complications can occur if a gap forms within the ligament during healing. If this occurs, the ligament may heal elongated and result in further instability of the joint. Ligament rehabilitation for grade 2 and 3 sprains is a lengthy procedure and needs regular input from a physiotherapist to ensure full recovery is achieved. In addition to the carpus/tarsal injury, compensation frequently occurs in other parts of the body due to off-loading the painful limb.

Luxation, or dislocation, involves the disruption of multiple ligaments and the joint capsule. In the carpus, luxations of the antibrachiocarpal joint (the top joint between the radius and the carpal bones) is most commonly affected (Jaeger, 2008). In the tarsus however, the intertarsal joints are commonly affected due to the poor interdigitation or congruency of these joints compared to the tibial tarsal joint (the joint between the tibia and the talus), which serves much better as a stabiliser. Combinations of fracture-dislocations or high-grade sprain-dislocations can be seen, and both require long term physiotherapy following immediate veterinary treatment.

Fractures may require screws or pin/plate fixation but in some cases, arthrodesis or pancarpal/tarsal arthrodesis surgery is required. This is where the affected joint is fully fixed or partially fixed with a metal plate to cause a fusion of the bone in order to improve stability of the joint. Pancarpal/tarsal arthrodesis is also used in grade 3 ligament sprains, particularly if it is an old injury that was not treated immediately. Less severe injuries may be managed with bandaging or carpal/tarsal supports. In all cases physiotherapy is highly recommended following the initial veterinary treatment. The physiotherapist will provide guidance on the best carpal/tarsal support and implement a progressive rehabilitation programme that is specific for your animal. If you adopt an animal who has undergone treatment for carpal or tarsal injuries, I would urge you to see a physiotherapist after adoption in order to obtain specific advice and treatment for your animal’s needs.

Tim is currently undergoing treatment following a tarsal injury. He had a pantarsal arthrodesis when he was taken into FoTH’s care. Unfortunately, Tim had some complications early on that required further surgical and physiotherapy intervention. If you look at the photographs below you will see that as a result of his injury, Tim’s tarsus is dropped (hyperflexed). This creates a straighter stifle and puts more strain on his lower back. Tim is still receiving physiotherapy to help manage these compensations and is doing well. He now has a stable tarsus and significantly less discomfort.

If you have any queries or questions about your own dog, please feel free to contact me at lynne@fourpawsphysiotherapy.com.au or call/SMS me on 0423 493 130. 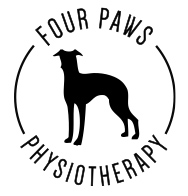 Come on Queenslanders, please recycle and help support Friends of the Hound!